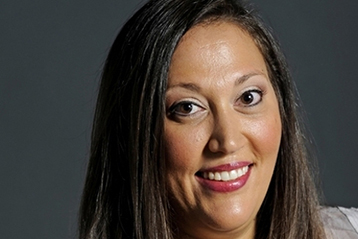 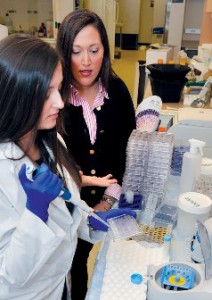 After a dozen years of searching, Analisa DiFeo, PhD, and her team have discovered what appears to be one of the key drivers in the spread of ovarian cancer.

The culprit is a biomarker, which can signal the presence of a disease. In this instance, however, the biomarker known as miR-181a plays a role in accelerating the development of tumors.

“We wanted to prove that it was actually doing something,” says DiFeo, an assistant professor of general medical sciences-oncology.

DiFeo likens the miR-181a to a stone in a truck. Her team, which includes colleagues from Case Western Reserve and University Hospitals Case Medical Center, wanted to determine whether this “stone” was resting on the gas pedal and moving the truck forward, or lying in the flatbed, along for the ride.

“This confirmed that the biomarker is driving the disease and driving the metastasis,” DiFeo says.

The team’s finding is a key step toward developing better drug treatments and, ultimately, early diagnoses. Both are critical because ovarian cancer is often diagnosed late and can’t be treated effectively when it recurs.

The discovery is both personally and professionally satisfying for DiFeo—who lost a great aunt and a cousin to ovarian cancer—as well as for her team, which includes university sophomore Olga Kovalenko.

“To be able to do these important experiments,” Kovalenko says, “is an honor. ”