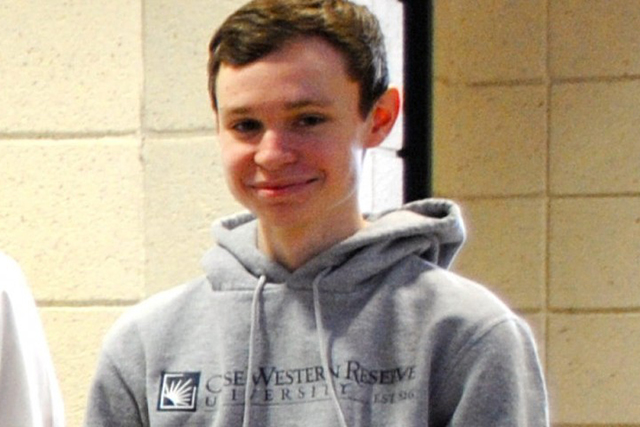 The first ever Intel finalist for Ossining HS, Daniel McQuaid, is studying a cancer-supressing protein.

“In my freshman year of high school, my cousin died of lung cancer, so that kind of sparked my interest in the field of science research,” the 17-year-old shared.

That was three years ago and now McQuaid, a senior, is the first ever OHS Intel Science Talent Search finalist.

“It’s just such an honor and I was ecstatic when I picked up the phone,” he said. “I was screaming on the phone with the Intel people.”

The call came after McQuaid spent an estimated 1,200 hours in the science lab at the New York City-based Mount Sinai Hospital researching KLF6, a protein identified as a cancer tumor suppressor.

“There had been a lot of studies in the lab about KLF6,” he said. “I was interested to see why there is so little of the protein in cancer cells. When it is highly abundant, cancer cells die. I was really focused on that aspect of the project.”

Intel projects proposals are initially submitted by high school students at the end of their freshman year. The work that started after that in a professional laboratory was a bit of a transition for the young researcher.

“Working in the lab can be pretty challenging,” McQuaid said, “especially because my mentor [Dr. Goutham Narla] was very generous in that he gave me a lot of independence. It was very hands-on.”

McQuaid’s time in the lab was split between research for a team project and his individual Intel submission, and despite the long hours, he’s still excited about the work.

“Something that I really love about cancer research is that it’s very transitional,” he explained. “My research can actually have impact on the field of cancer therapy, which is very rewarding in itself.”

McQuaid’s research has elevated him to an elite group of just 40 national finalists in the Intel competition. In March, the group will head to Washington D.C to compete for cash prizes—the winner will receive $100,000 from the Intel Foundation.

With his final year of high school winding down, McQuaid said he has been hoping to study molecular or cellular biology at either Stamford University or Princeton University. And last week, another option opened up.

McQuaid eventually go to med school and pursue a career as a researcher.

Wherever he ends up, he’s already left behind his legacy in Ossining as the first Intel finalist.