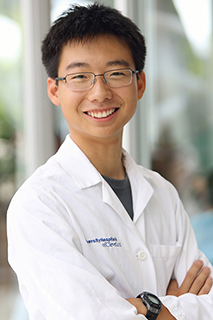 Name of mentor and years in program: Dr.Analisa DiFeo was the PI and PHD student Sandra Mantilla was my mentor. I have participated in the program for the summers of 2015 and 2016.

Future professional aspirations: I want to have a career in medical research. Hopefully I can go to medical school and ultimately become involved in cancer research.

It helped us think like scientists, questioning every hypothesis, probing whether it could be proven.

What opportunities for research were you given in your high school?
Our high school has labs that are similar to the experiments done at Case Western Reserve University. For instance, my bio class had a lab on electrophoresis, which is basically what I did in Dr.DiFeo’s oncology lab. Also our school had a very sophisticated science fair which dealt with many real world problems. It helped us think like scientists, questioning every hypothesis, probing whether it could be proven. For example, one student wanted to understand the reason bananas go black. He was testing for too many variables like temperature, sunlight, oxygen, at once, so his results were confusing. We suggested narrowing his independent variables to one at a time. This eventually made his experiment more successful because it became clear and concise.

How did you realize you were interested in research and science?
I have always been interested in science in general; even though I did not know what I was getting into two years ago when I first volunteered at the lab, I found the work engrossing and interesting. I found myself spending nearly my whole summer trying to learn the skills needed to do research properly and I really enjoyed it. In addition, I like how people think while doing research and ways researchers in the lab come together to help each other toward a common goal.

Why did you not want to wait until college to gain the research experience?
I heard a lot about research from my mother who is involved in cancer research and my father who is a physician in China. I would often ask them about their work and thus I got interested in being involved in research before college.

What moved you to look for the program?
I had found research work to be interesting and I pursued any program where I could sharpen my skills. I told Dr. DiFeo how much I was enjoying working in the lab and she told me about ways The Young Scientist Foundation could further help me. So I decided to enroll in it.

On the first day I did not know what was going on and I felt like I needed to learn a lot.

What was the first day in the lab like for you?
On the first day I did not know what was going on and I felt like I needed to learn a lot. Even though it was hard, I found it truly interesting. I started at 8 am. and observed my mentor perform western blotting for the rest of the day. Little did I know that western blotting would become a big part of what I do now. My first day passed very quickly for me since I was seeing things I could have never imagined before.

She would always make sure I was confident in what I was doing before letting me work alone.

Can you describe the relationship you built with your mentor?
Sandra was one of the nicest and more helpful people I have ever met. She was patient with me and allowed me to learn by doing. She would always make sure I was confident in what I was doing before letting me work alone. Also she was very approachable. I was not scared to ask questions and her answers were always clear. When new people came into the lab, she would always be there to help them. Her method of teaching people inspired me to be like her. For example, I had to take on the role of teaching another student to do western blotting, and made sure she learned by doing it herself. After a while she was able to even do it better than I did. I felt a great deal of joy at seeing how well she did.

Describe your most memorable experience with the program.
For five weeks in the program, I was stuck. Nothing I was doing worked and I did not even know what I did wrong. I was disappointed that I would have to leave without any good results. On what I thought was my very last day, I got the results I wanted. This was truly memorable because I could have stopped working the experiment a week before, and if I did, I would have never got what I wanted. I would have gone home dissatisfied. Now I know what to do and I am aching to go back to the lab and continue.

Her method of teaching people inspired me to be like her.

What has been the best thing about being in the program?
The program gives young students who want early experience in research an opportunity to sharpen their skills. It was also great working with wonderful people dedicated to achieving a common goal.

As a student, how did you balance your schedule with work at the lab?
I participated in the program over the summer, so all I had to do for school was summer reading.

What is the one thing you wish you knew before starting the program?
It would have helped my confidence if I had realized how nice and helpful everyone would be. At first I was very shy and intimidated and it took me a while to get used to it. Now I am very comfortable with interacting with my lab coworkers and mentors.

For five weeks in the program, I was stuck. Nothing I was doing worked and I did not even know what I did wrong. I was disappointed that I would have to leave without any good results.

What should other students look forward to when starting the program?
It takes time to really get into research. However, if you stick with it, you will have a great deal a fun and you will learn a lot of new things.

What inspires you?
It inspires me that I am a part of something that will help real people eventually. My grandfather had cancer and died of it.

What are you concentrating on now?
I am applying for college and I am going into my senior year of high school. If I have a chance in the future I would gladly go back to the lab.