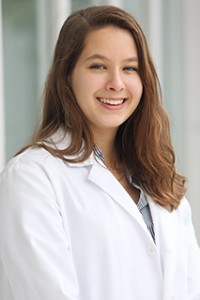 Description of research project: I specifically was looking at the role of the 26 known B subunits of PP2A, the tumor suppressor protein we were researching. PP2A, when turned on in cancer cells, stopped tumor growth and sometimes even caused apoptosis. Dr. Goutham Narla has discovered a compound that turns on PP2A in tumor cells, allowing for a possible new treatment for cancer.

Skills obtained: Through the experience with the Young Scientist Foundation I learned a lot about teamwork. In the lab, even if you have your own project, it is based of the work of your peers, and their findings influence your own. I like to think of it as a puzzle. One person might connect a piece, and then the puzzle piece you are holding can be attached to theirs. Each finding clarifies the big picture more and more.

I also learned to deal with pressure. While all lab work was important, sometimes I would feel more pressure when I had to perform an experiment with a limited resource. I learned that staying calm was essential to getting the job done. In addition, I learned a lot about maintenance of cell lines and western blot analysis.

In the lab, even if you have your own project, it is based of the work of your peers, and their findings influence your own.

How did you realize you were interested in research and science?

I always wanted to be a doctor, and science went along with that. In high school I took many science classes that I loved, and one of them happened to be a class in molecular genetics. This class made me look at scientific research in a new light and showed me the connection between medicine and research. The experience intrigued me and inspired me to participate in a high school program that connects high school students with research mentors and introduced me to Dr. Narla and his lab.

Why did you not want to wait until college to gain the research experience?

Frankly, I did not see a reason to wait. I was given the opportunity to see the whole process of drug development, so I was excited to explore it. I thought the experience would help me in understanding biology better as well as give me a leg up in college.

What was the first day in the lab like for you?

I was very nervous on my first day. I was just a high school junior, surrounded by experienced PhD students. I was scared that I would mess something up, mostly because I knew very little about working in a lab. Abbey Perl became by lab mentor and taught me everything I know. I went from being confused to actually being helpful, and I was able to make new friends along the way.

My mentor pushed me exactly the right amount to transform information into knowledge.

How was the program different from what you had expected originally?

I expected to be pushed off to the side and simply observe others at work. Instead I was handed the metaphorical pipette pretty quickly and became part of the team. I originally expected to be treated as a hindrance; instead I was treated as an equal and as an asset to the team. Though I expected everyone to be nice, my mentors and peers went beyond that and took the time to teach me the things I did not know or understand.

Can you describe the mentoring process?

Dr. Narla has always been very inviting and open. Whenever I was confused about something, he was always there to answer any questions I had. He would ask me probing scientific questions every time he came into the lab. At first these questions seemed complex and intimidating, but with his guidance, they made sense. He pushed me exactly the right amount to transform information into knowledge. As Dr. Narla is very busy I did not expect him to be so involved in mentoring, yet he was always open and joking with other researchers and lab members while guiding them in their discoveries.

What has been the best thing about being in the program?

My lab team has taught me not only about science, but also that I could do almost anything. They made me feel useful and smart in a room full of scientists. I became a self-sufficient member of the team, completing experiments by myself and performing them successfully. It was a huge difference from where I had started in the program, and that transformation has given me confidence in my ability to handle new challenges.

What is the one thing you wish you knew before starting the program?

I wish I knew how nice and welcoming everyone in the lab would be. I had an image in my mind of stogy old men in lab coats, and what I found instead was a team of vibrant people. Many members of my lab team were female, defying the gender stereotypes set on labs. If I had known how fun this program would be, I would not have stressed as much before my first day, and would have probably applied to it earlier.

I became a self-sufficient member of the team, completing experiments by myself and performing them successfully.

What should other students look forward to when starting the program?

They should look forward to being accepted as an integral part of the team, no matter how little they know about science or research. They should also look forward to learning a lot of information that will continue to be useful outside of the lab. The knowledge that I obtained at the lab has helped me a ton in AP Biology and other classes. Finally, they should look forward to meeting other people their age going through the same process and forming great friendships over the course of the program.

I am inspired by the work the lab does. It is strange to think that I was helping to create a treatment for cancer, but that is exactly what I did. To think I, a high school student, can do such a thing, gives me hope that anyone can do anything they set their mind to. It is inspirational to think about all the patients the compound we were investigating can help.

What are you thankful for?

I am thankful for all the unique opportunities I was given. I hope that the Young Scientist Foundation gives other students the ability to grab ahold of this amazing opportunity. I am thankful that such a great program exists to help other young people blossom into scientists.

What are you concentrating on now?

Currently I am concentrating on getting into college and focusing on my senior project, for which I will be working with Dr. Michael Nemunaitis from the Cleveland Clinic’s Obstetrics and Gynecology and Women’s Health Institute. In addition, I was also invited back to the lab this summer and I plan to take Dr. Narla up on his offer.