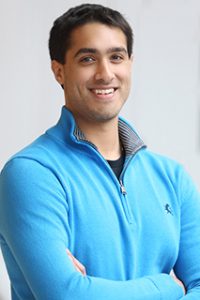 University: University of Connecticut, Class of 2016

Mentor and years in program: I have trained with Goutham Narla for the summers of 2013 and 2014.

After completing the training with the Young Scientist Foundation and going on to study and do research in a prominent university, what, in your opinion, was the significance of participating in the program?
Because I had little experience in the lab and in research when I joined the Young Scientist Foundation, I frequently did not understand many of the experiments and why they were necessary. Knowing that I had a hard time grasping certain experiments, other lab members would explain things to me based on what I had just learned in school. Eric Yuan was excellent at doing this. Before starting an experiment, he would explain exactly what we were going to do and why we were going to do it. He would explain what each step would do and how the chemistry worked in as much detail as possible without overwhelming me. On top of this, he would frequently ask me to recall our previous conversations on the experiment and really make sure that I understood what the experiment was achieving, not just if I knew how to follow protocol properly.

After that first summer, I realized that I would be able to help more by spending long hours in the lab researching cures for a disease than I would by being a physician.

Thinking back, how did you get interested in science and research?
It was only after I had worked in Dr. Goutham Narla’s lab at Mount Sinai that I developed interest in research. I had always been intrigued by science and prior to that first summer, I was seriously considering pursuing an MD degree. After that first summer, I realized that I would be able to help more by spending long hours in the lab researching cures for a disease than I would by being a physician.

Why were you originally interested in the program?
This program gives high school and undergraduate students with absolutely no background in research an opportunity to discover if research is the right fit for them.

Do you remember the project you worked on in the lab? Can you describe it?
I do remember one of the last projects I worked on while I was at Case Western Reserve University. Eric Yuan and I had been attempting to pull down the protein that was directly interacting with the drug through co-immunoprecipitation. We had spent multiple weeks trying to tweak the protocol in order to get usable data from it and right before I left for that summer, we were able to get a quantifiable amount of protein.

This program gave me a much better understanding of what research entails. It is nothing like people see in the movies, rather it is a long and tedious process.

How has training in the program changed your perception of working in a scientific field?
This program gave me a much better understanding of what research entails. It is nothing like people see in the movies, rather it is a long and tedious process. Experiments often do not work or the data you obtain looks nothing like you were expecting, so you frequently spend many hours working in the lab. Because of these long hours at Case Western Reserve University, I now have an expectation that my work may take many more hours than I anticipate. However, when you are finally able to get that experiment to work or get the results that your hypothesis suggests, there is no greater feeling.

What was the most challenging thing in the training for you? How did the program push you out of your comfort zone?
The most challenging part of the training was learning why I was doing certain experiments. It was fairly easy for me to pick up how to do an experiment with a little bit of practice, but remembering what was so important about the experiment was where I had trouble. I would often have to read long papers, but both Eric Yuan and Dr. Narla would go over them with me to make sure I understand them.

When you are finally able to get that experiment to work or get the results that your hypothesis suggests, there is no greater feeling.

What were some of the key concepts and skills you learned that you still use now?
Polymerase chain reactions! Now that I work at the Microbial Analysis, Resources, and Services (MARS) facility, all I do is polymerase chain reactions. This skill was invaluable for acquiring this job, as it is the best way we are able to prepare samples to run on Illumina’s MiSeq.

What is the significance of finding a good mentor early on?
Having someone to speak to about career goals is extremely important. If I had not been given the opportunity to work with the Young Scientist Foundation, I would still be thinking that being a physician is the right path for me. Only after I had spent some time in the lab and personally with Goutham Narla, did I realize that I get the greatest amount of joy through research.

How has your mentor influenced your career trajectory?
I am very much interested in choosing a career that is focused on drug development. I want to help people and I know that I am willing to put in the hours to create the cure for whatever disease I set my mind on.

If you wake up every morning excited to go to work, you are successful.

How do you define success for yourself?
Success is being happy with what you do every day. If you wake up every morning excited to go to work, you are successful. As my father always says, “Do what you love. Don’t choose a job for the money because when you do what you love, everything will fall into place.”

What is the key to making the best of the YSF training program for somebody who is just starting out?
Ask a lot of questions. You may feel that you are asking stupid questions, but you will not learn unless you do ask them. Everyone started off in your shoes at one point, so do not feel intimidated.

What are you concentrating on right now? What are some of the initiatives you are leading?
I am currently the main tech at the Microbial Analysis, Resources, and Services (MARS) facility at the University of Connecticut. We are a core facility receiving samples from all over the world for sequencing on our MiSeq. I spend most of my day running PCR’s and prepping genomes to run on the sequencer. I have recently become familiar enough to run the sequencer on my own.