CLEVELAND, Ohio — Last spring, University Hospitals Case Medical Center and Case Western Reserve University recruited a physician-scientist whose key discoveries — made while in medical school — of a gene that suppresses cancerous tumors first put him on the scientific map more than a dozen years ago. 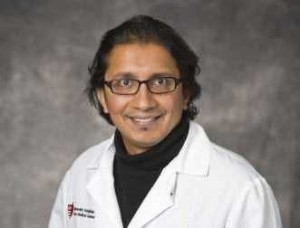 A native of California, Dr. Goutham Narla moved East after graduating from Santa Clara University. He would spend the next 15 years in New York City, first in medical school at the Mount Sinai Medical Center, then as a physician and faculty member at Mount Sinai Hospital.

It was there he conducted the bulk of his research on the gene KLF6, which acts as a tumor suppressor. Several years ago Narla’s lab first discovered the link between a mutant form of the gene that causes cancerous cells to spread uncontrollably, particularly in breast cancer.

But it was the “incredible opportunity” Narla said he received last spring that lured him from New York to UH and CWRU’s medical school.

“I think this is an extraordinary time for Cleveland,” said Narla, 38. “In a very difficult funding environment, they have philanthropic efforts moving research forward.”

The honor is through the UH Harrington Discovery Institute, part of a larger project unveiled in February 2012 called the Harrington Project. Designed to speed the discovery of new drugs and attract nationally recognized researchers to Cleveland, the project is fueled by $250 million in donations and other funding, including $50 million from the Harrington family.

That same level of backing wasn’t available at Mount Sinai, Narla said. As a resident Harrington Distinguished Scholar, he can practice medicine and access grant funding to move his research forward. Four graduate students followed him from New York to work in his lab in Cleveland.

An added bonus: Narla’s wife, Analisa DiFeo, is furthering her ovarian cancer research at her own lab at Case Comprehensive Cancer Center, which she joined last spring.

Over the next decade, the UH Harrington Discovery Institute aims to recruit at least one physician-scientist each year to be resident scholars; and to provide grant money to as many as 10 physician-scientists annually for the class of Harrington Scholars. The first class was announced in December, chosen from a field of 130 applicants from 53 different institutions.

As a medical student at Mount Sinai, Narla began working on the research project in the lab of his mentor, Dr. Scott L. Friedman. The original focus was to study the gene KLF6 — which they had identified — and its potential role in liver regeneration. But the project changed course dramatically when they realized how big a role the gene played in cancer.

The focus shifted once again a few years later, when Narla discovered that the “bad” form of the gene played a role in metastatic breast cancer.

“We’ve identified a splice variant of this gene that programs a breast cancer cell to spread throughout the body,” Narla said.

The study involved analyzing tumors of nearly 700 patients from the Netherlands, two-thirds of whom were between ages 40-70 and it took several years to analyze and reproduce the results.

“It took a couple of years to [prove] that the [splice variant] wasn’t an unrelated event, but a driver of the disease,” he said.

Women whose tumors have high levels of the gene — something that can be measured through a tumor biopsy — are 50 percent more likely to die because of a recurrence and metastasis of their cancer than those with low levels of the gene.

Results of the study, a collaboration of Narla, DiFeo and researchers from Mount Sinai and the Erasmus Medical Center in The Netherlands, were published Wednesday in the journal Science Translational Medicine.

The next step of the research is to see how the mutant gene (KLF6-SV1) can be used to predict which breast cancer patients are at greater risk for having a more aggressive type of cancer, and to develop more effective treatments that will be able to prevent the cancer from spreading.

That work already has begun. Since his arrival, Narla has been collaborating with the breast cancer team at UH and CWRU, led by Dr. Lyndsay Harris, director of UH’s Breast Cancer Program and professor at CWRU’s medical school.

Much further down the line is pre-clinical testing of drug therapies that are able to turn off the mutated KLF6 gene.